Wow, what an experience!  THANK YOU Oklahoma Restaurant Association for allowing me to to participate in this event during the ORA Expo 2022!  It's an honor to be known as one of the TOP CHEFS in Oklahoma.  Below you will find an article written by the FOOD DUDE, Dave Cathey of the Oklahoman  about the event.

Congratulation Ricky for a job well done.  Your dishes were beautiful.

Thank you and congratulations to my new culinary buddy Braylon! I couldn't have done it with out you! 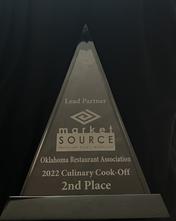 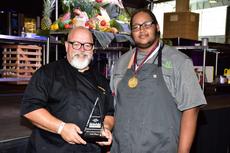 Chef Ricky George in in between kitchens right now, but he's also the hottest chef in the state.

George, who started out cooking for chef David Henry at The Hutch, also has worked at Osteria before landing at Bar Cicchetti.

"Chef David Henry showed me the fundamentals," George said. "From there it just kind of took off and I've cooked around the city with some incredible chefs."

He fought off a game effort by chef Scott Liner, owner of the Yum Pig food truck. Both chefs were assisted by culinary students and provided a cornucopia of ingredients from Super Cao Nguyen Market and Hal Smith Restaurant Group.

George had an hour to use bison tenderloin, beef tenderloin, wagyu beef, rib-eye steak and shrimp — plus mystery ingredients that included dragon fruit and fire morels — into at least one dish. George created an appetizer and center-of-the-plate entree to earn the Grand Champion's Trophy and winner's check. He was assisted by Gunner Putman, a culinary arts student at Oklahoma State University Institute of Technology in Okmulgee.

Liner took home $1,000 and a trophy. The runner-up was assisted by Breylon Swope, of Muskogee's Indian Capital Technology Center.

Other culinary students who participated in the two-day competition were Katie Barnes, Makayla Pike and Joel Keel.

Chefs were judged on plate presentation, creativity, product taste, product texture and sanitation practices, as well as use of their assistant.

George said he planned to save his winnings, and his future was clear.

"I've been cooking ever since I can remember," he said. "I've always had an affection for food, but never knew where that would take me. I can't ever see myself doing anything else." 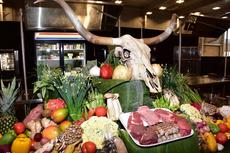